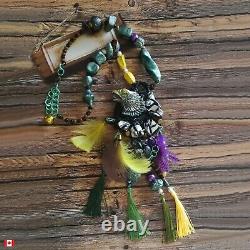 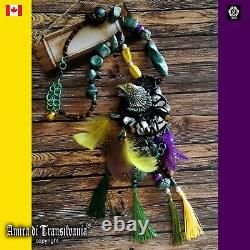 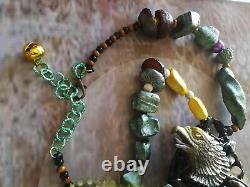 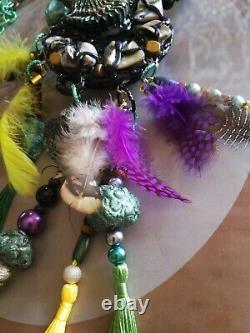 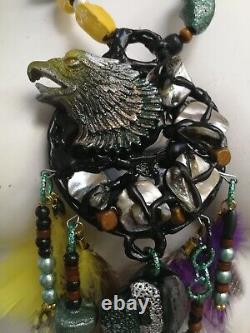 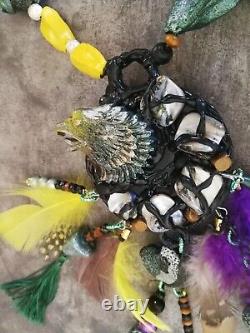 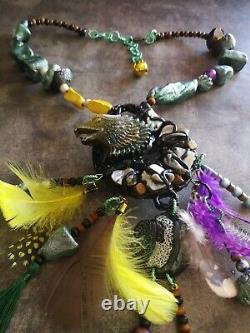 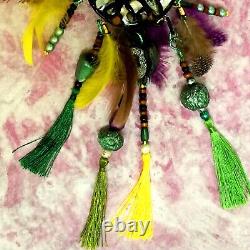 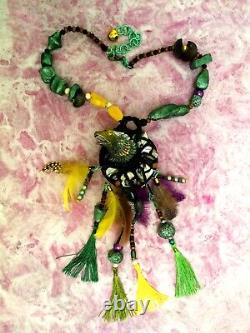 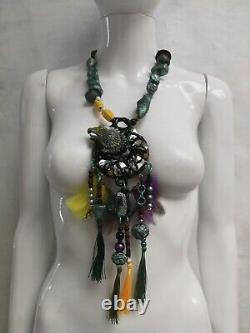 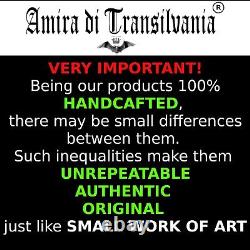 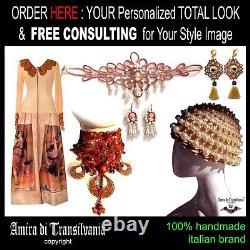 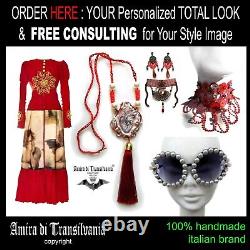 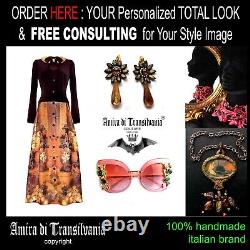 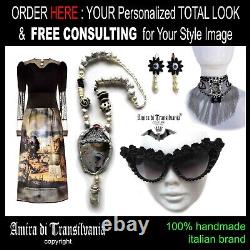 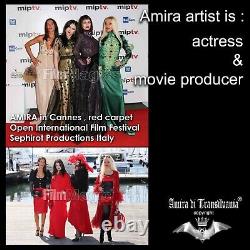 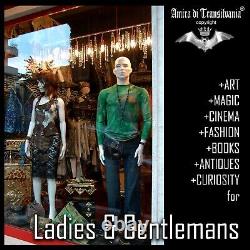 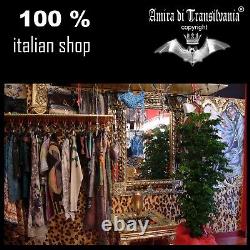 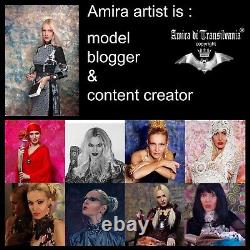 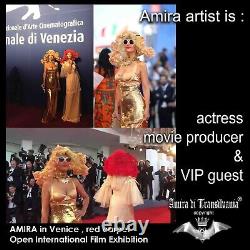 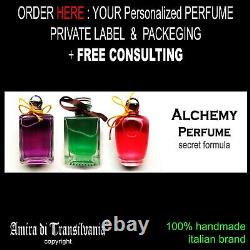 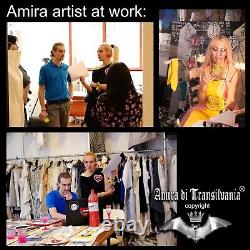 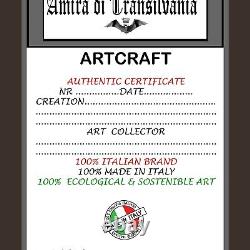 This advertisement, for technical reasons, states that some "copies" of this jewel are available. Indeed, being created COMPLETELY BY HAND, it is a UNIQUE and EXCLUSIVE specimen of which there can never be another IDENTICAL. Being an artisan product, Amira di Transilvania, WITHOUT additional costs, can create similar jewels PERSONALIZING THEM according to the needs, the desires and the tastes of the individual customer. THE CHIPPEWA STYLE EAGLE JEWEL.

The Chippewa Eagle Jewel is a unique and original necklace of ethnic-styletribal created and painted by hand by Amira Munteanu Bergmann. Stylistic and aesthetic canons typical of the Indians of America belonging to the Chippewa tribe. It is an homage to them payed by reproducing two fundamental elements of their culture: the eagle and the dream catcher. The central body of the Bijoux is composed of a black disk in polymer clay decorated with elements of mother-of-pearl and stones glued to it with smears of clay reminiscent of a spider's web.

From this composition emerges the head of an eagle. To complete the disc-"dream catcher" is a series of pendants formed by traditional colored feathers interspersed with sequences of beads and elements in polymer clay and tassel. The upper part of the Jewel consists of a series of semi-spheres in avocado wood interspersed with other elements in polymer clay and is closed by a chain. Being a handmade product, if, on the one hand, its various components do not have a regular shape, on the other hand there can never be a jewel identical to this. The eagle is one of the most sacred animals for Native Americans.

Warriors of many tribes wore one or more of its feathers that were sometimes cut, colored or otherwise decorated with some discretion of the bearer, but always according to canons shared within the community. The Chippewa allowed a warrior who had scalped an enemy to wear two eagle feathers on his head, while the act of capturing a wounded prisoner on the battlefield conferred the honor of wearing five eagle feathers.

At the same tribe there was also a particular legend about the dream catcher. A spider wove its web in a corner, near the place where Nokomis, an old woman, used to sleep. The old woman, daily, watched the spider work. One day she was visited by a nephew who, seeing the spider, was frightened and tried to kill it, but her grandmother prevented him. The young man, astonished, asked her the reason for her behaviour, but she only passed him without giving any answer.

The Moon, meanwhile, approached the window, illuminated the web with its rays. Then the spider gave the promised gift to the old woman: a dream catcher. Giving it to the old woman, the spider invited her to observe it carefully, explaining that it would be able to capture the bad dreams, leaving only the beautiful ones in the central hole. The Chippewa Eagle Necklace is part of a collection of ethnic Jewels and Pendants inspired by the traditions and aesthetics of specific tribes, more or less ancient, from various parts of the world.

The Project aims to rediscover and enhance the identity and peculiarities of local cultures through the revival and reinterpretation of ethnic jewelry, talismans, amulets to counter the megatrend of communication, of the uprooting/disembedding, of the loss of the memory of the past, triggered and fed by the ideology of globalization. Within ancient tribal cultures, everything worn, especially during religious ceremonies, was cloaked in an aura of mystery and sacredness. Consequently, the jewels, although also having a decorative and ornamental function, first of all, were thought to have deep symbolic and magical values linked to religion and superstition. To remain faithful to this spirit and since in the realization of ceremonies and magical rituals are fundamental not only the gestures that are performed and the formulas that are pronounced but also the tools that are used, the creation of this mini-sculpture has followed a specific path in tune with the secret rules of the Arcane in order to load it with appropriate energies. Amira Munteanu Bergmann has taken care of the whole production process of the Jewel: from the concept to the creation of the various components, from their assembly to their coloring and decoration.

To sign them is Amira Munteanu Bergmann who, as an artist, actress, entrepreneur, passionate and curious researcher, scholar and collector, is one of the most brilliant and multifaceted figures on the Italian scene. Thus the reproduction, either integral or partial, of them and of their images is forbidden. Any violation of intellectual property will be sanctioned in accordance with the law. Brand has no dealer around the world.

Evaluates the importance of Made in Italy craftsmanship, therefore it enhances the talent and the resources of Creatives and Designers working by hand in Italy, in an environmentally responsible and sustainable way. By re-evaluating local production, it fights against multinational and mass consumerism brands that relocate, exploiting foreign workers as well as losing control over the quality of what they put on the market.

Everything, from the initial concept to its realization up to the way of communicating it, is rigorously signed and created by. The main goal of the Brand is the complete satisfaction of the needs, of the desires and of the whims of its buyers.

Is customized, in limited edition and series, fully conceived, designed, modeled, painted, decorated by hand, with eco-sustainable materials. For this reason there will never be two perfectly alike objects. To underline their uniqueness, each of them is accompanied by a certificate of guarantee and orginality, marked by an archive number and headed with the name of the purchaser. Respecting all the criteria of environmental sustainability, craftnabship and uniqueness.

Is a 100% Made in Italy luxury brand. Products are handmade, it is possible to request their customization WITHOUT additional costs. Everyone can, therefore, receive in short, his small work of art, unique and unrepeatable, made according to his specific indications and requests. Also offers personalized gift boxes and many gift ideas that can satisfy all the needs, desires and whims of its customers. This item is in the category "Jewellery & Watches\Ethnic, Regional & Tribal\Necklaces & Pendants".

transilvania" and is located in this country: IT. This item can be shipped worldwide.