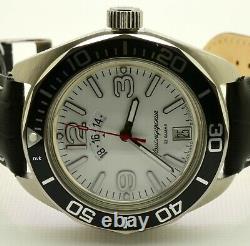 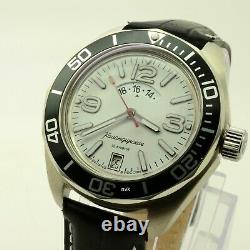 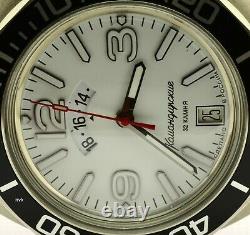 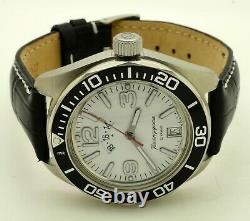 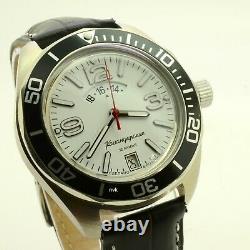 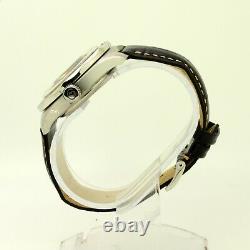 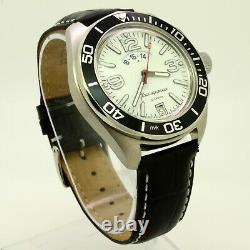 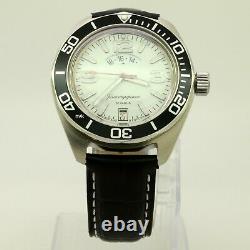 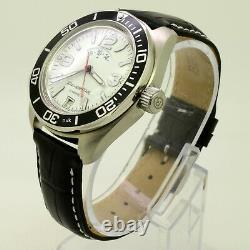 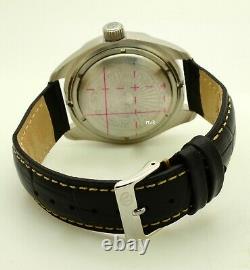 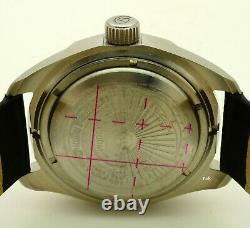 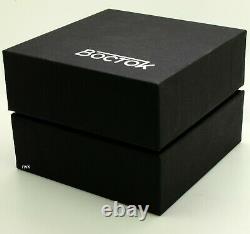 Automatic Vostok self-winding movement 2432 with 32 ruby jewels (no hands winding required, but You can wind up it with winding stem if You have not worn the watch in some time). Water resistant up to 200 meters 330 feet - Central second hand - Anti-shock balance - Screw-down crown, as well as case back - Case diameter (without the crown): Appr-41 mm - Case thickness: 15 mm - Stainless steel case - Width of strap/bracelet 20 mm - Graduated rotated bezel from st. Steel - Totally wound watches run not less than 31 hrs. Luminous hands and markings - Time disk indicator. Weight-(with strap) about 81 grams - Average term of service 10 years. We strive to provide 100% happy customers! We located in Moscow and sell Russian watches and. Main principles of our business are. Honesty, punctuality, responsibility and friendliness! All watches we sell are BRAND NEW and comes with original factory papers or box from factories wholesales or Mega whole sale watch dealers. Before shippment all the watches necessarily be checked for any damage, inconsistencies selected model and watch work. Unfortunately as a rule every year before Christmas and New Year period October-beginning of February Russian post collapsed because of gifts , During this period delay can be up to 1.5 month and sometimes even more!! We will surelly try to provide a sitisfied solution! I will be happy to answer any of your questions as they arise! History of the Chistopol Watch Makers company!

October 15, 1941, a resolution was adopted to evacuate the 2nd Moscow Watch Factory to the city of Chistopol. The equipment required 170 railway cars. Already in November they began to arrive in Kazan, and then on barges were delivered to Chistopol. Almost 500 employees from Moscow arrived with the equipment. The local population had to be involved in the deployment of the new plant, mostly teenagers aged 13-15, they became the first workers of the new plant.

Together they managed to establish production. In January 1942, for the needs of the front, the production of military-purpose watch began. Already on July 1 the plant started working at full capacity! This date is considered the plant's birthday, it was named the Fifth Watch Factory.

In February 1943, the plant began to produce civil wristwatches, the first model was called "Kirovskie". Since 1949, the production of the "Pobeda" watch began with a shock-proof mechanism, and in 1950 the construction of its own premises began.

In 1952, on the watch exhibition in Milan, chistopol`s watches gained fame and recognition. And in the 62nd year at the Leipzig exhibition the precision watch Vostok will receive a big gold medal. This watch, with the mechanism 2809, deserves a separate publication. Chistopol watches have proved themselves as strong and reliable. In 1965, the Ministry of Defense ordered a watch for awarding and bonuses - "Komandirskie". This marked the beginning of closer cooperation with the military.

The experience gained was useful in the development of watches for military divers, thus in 1967 there appeared a watch with a water resistance of 200 m - "Amphibian". Later for the Ministry of the Navy, Vostok plant will release an exclusive Amphibian model, with a calendar and self-winding, the people will be called the ministerial.

Since 1969, all watches are produced under the same brand name "Vostok", and the company itself was called Chistopol Watch Factory "Vostok". In 1972, the production of a new caliber 24 mm, with a calendar and self-winding started.

In the 80-90s, many new models appear, a large number of watches are produced for export. July 1, in Chistopol Glavpribor watch factory NK MV 835, created on the basis of the Second Moscow watch factory and DOS factory, has earned in full force, manufacturing producs for needs of front. Release of a K-43 man's watch and instrument production are begun. The machine-tool construction for watch manufacture is organized.

Precision watch "Vostok" are awarded with the big gold medal of the Leipzig international fair. "Komandirskie" watches are developed and started in manufacture and Chistopol watch factory became the official supplier of these watches to the Ministry of Defence of the USSR. Release of "Amphibian" watches is mastered.

Since 1969 all watch of a factory are manufactired under "Vostok" trade mark, and the factory began to refer "Chistopol watch factory "Vostok. Release of a new 24 calibres man's watch with a numerical calendar, a double calendar, with automatic movement are begun. Watches are exported to 54 countries of the world.

Grechko during visit on a factory thanks watch-makers for release of qualitative products and gives to chistopol watch makers the "Vostok" watch which has visited the space. This year the factory issues the plenty of a watch - 4,5 million pieces. All production only the first and supreme categories of quality.

The factory passes under jurisdiction of Republic Tatarstan and becomes Open Joint Stock company. Small enterprises on manufacture of completing for watches are created. The big parties of watches are exported to Italy, USA, Switzerland.

In USA the greatest popularity was received with "Desert storm" watch. Is the leader of the domestic watch and clock industry on volumes of release and sales of a man's watch. Release of the female watches, expensive, prestigious man's watch, a quartz alarm clock are begun. The factory became the owner of "The Russian National Olympus the prestigious premium in a nomination "To Technology. A science" and the winner of "The Russian organization of high social efficiency competition in a branch nomination.

Popular watches "Komandirskie" have got modern design and more complex mechanism. The enterprise is certificated on the Russian and international quality standards of GOST and JQ Net. The first Amfibia watches were manufactured in 1967 in the USSR by Vostok Watch-Maker Inc.

The watches that became the symbol of all Soviet 60th-70th. Professional seamen, divers and submariners gave their preference to Amfibia because of their simplicity and reliability.

Organized in 1942, Vostok Watch-Maker Inc. Especially to its own jubilee and to the 40th anniversary of creation the first Amfibia watches has issued a collection series of them. This Amfibia-1967 recreated under old sketches and drawings, transmits the spirit of that epoch with all its outward appearance and continues to follow horology traditions.

Each watch from limited edition series in 1967 pieces has its unique number on the back cover and a signature of the master who has assembled it in the accompanying certificate. Instruction manual for Vostok watches. In order to provide longer life and optimal work of Vostok watch we ask you to read the present instruction carefully. While wearing watch on your hand every day there's no need to wind it up.

Watch running is provided by a special mechanism of automatic self-winding up, which makes your watch run thanks to movement of your hand. But if you do not wear your watch more than 24 hours it's necessary to wind it up. Unscrew the winding head counter clockwise from the case - position 2 and start winding clockwise by turning winding head on 25-30 revolutions, slightly delaying the head from the case.

Moving the winding head from figure "12" to figure "8" counter clockwise and then from figure "8" to figure "12" set the correct date. Notes on care of the watch: - watches should be protected from shocks, influences of chemical products and influences of magnetic fields; - for prevention of misted over under glass it is necessary to supervise, that the winding head was screwed well up; - in order to avoid penetration of dust and a dirty in the mechanism forbidden to open back cover of the case.